I’ve been to Brighton in April. At that time, the weather was okay, what means that sometimes it was a bit sunny, sometimes a little bit rainy. It was useful to have a warm jacket with me, I could wear whenever I wanted. Especially in the evenings it got colder.

I’m sure, I’ll never forget this journey... it was awesome!

My host family, a mother with three daughters about my age (18 years), lived in Southwick, a village near Brighton. I had to share my room with two other German students, two younger girls, I came along with.

In the morning, we got up at about 7 o’clock, took breakfast (Cornflakes; toast with salty butter / kind of Nutella / jam) and went to the next bus stop. Getting into town by bus took about 15 minutes and finding the way to Brighton College or Brighton University was no problem.

I had chosen the “Oberstufenkurs”, so my lessons were divided up into two parts:

For each part, there was one teacher. Our grammarian Wiebke also was our group-leader. She was there for us whenever someone needed her. And she was German, so there were no problems of understanding.

Because I was one of the oldest pupils (in grade 12) taking part in this normal course, the grammar lessons were a bit boring for me. Nearly everything was repetition. But I got more difficult exercises than the other students and I think even this way of repetition was very useful for the following English tests at school.

In my eyes, the lessons by George, who taught us the right pronunciation of English words and how to speak in “a real English way”, were more interesting. This was something special, because we had never learned that in school that intensively so far.

After the lessons had finished, we had spare time till a special point of time, where our activities started.

Anyone was ever forced to take part in it, though everyone did so. Mostly, it was great fun!

Here are three “insider-tips” for you:

Wear very, very comfortable shoes when you take part in the walk to Rottingdean! The way is longer than you think.Don’t expect too much from the Greyhound Racing!   If you like dogs, it could interest you. Because you go there in the middle of the week, there are only some persons watching and the atmosphere is not the way you could expect when you think of England, bets and racing. Before watching a cricket match, get familiar with its rules! We were watching without knowing anything, what made it difficult for us to understand the course.

We also had the opportunity to take part in different trips. I took part in the following ones:

This was a great trip! I really enjoyed visiting these famous places.

In Windsor, we visited the Queen in Windsor Castle (Well, she was there, but nobody saw her.) Besides, we were able to see the Changing of the Guards. That was kind of funny.

We also could have gone to Eton, but because of holidays in Great Britain we wouldn’t have got to know the characteristic atmosphere of Eton, that’s why we took all the time for visiting Windsor Castle.

After that, we went to Oxford by coach.

Oxford is an impressing old town. I wish I were able to study in one of its old colleges.

The guided tour through town really was informative. In the end we could visit Christ Church, a college where some scenes of the Harry Potter films take part in. All in all I enjoyed it, because I’m a fan of Harry Potter and it was nice to take pictures e.g. on stairs you know from the movies.

Salisbury Cathedral was big, rather pretty and its atmosphere was special, because we visited it at Easter while a service was taking place.

At first, Stonehenge seemed to be a bit boring, but the more we got to know about it’s history, the more it got interesting.

Bath was nice, too. We had much spare time. The ice cream in bath is very good

I also visited the museum of the old Romans and can recommend it to you. It tells the early history of Bath in a vivid way.

This trip including Madame Tussauds and a sightseeing tour was contained in the price.

The whole day was great fun! But if you take part in it, don’t forget to wear very, very comfortable shoes! And wear pretty clothes, because at Madame Tussaud’s you will take many photos!

We also had the chance to visit London for a second time. But for this trip, we had to pay six pounds for the train on our own. Nevertheless, I only can recommend doing that, because London is a great paradise, if you want to go shopping! Don’t forget to buy some souvenirs at Harrods. And another tip: Don’t waste your money at Camden Market. I didn’t like it at all, though it was recommended to me.

Everyday, my lovely host-mother gave me a lunch packet, containing an apple, a little bit of chocolate, crisps, white bread (Don’t eat too much of it – it makes fat!) and a bottle of water. Nevertheless, we used to buy drinks at TESCO (a huge supermarket) or a snack in town (You have to eat Fish and Chips in Great Britain!). So, think of taking enough money with you. Brighton is also a little shopping paradise. In the lanes for example you can buy things, being something special.

In the evening I tried to get home between six and seven o’clock, because at that time, my host mother had prepared dinner for us. But even when I came home later, I always got a warm meal.

Nearly every day, we met at the Pier in the evening or we took part in the evening activities. Watching a film in the cinema is cool, because these films aren't in the German movies so far.

Going dancing in a disco was nice and going bowling was great fun, so we went there a second time. But then we had to pay for it.

After these activities we met at the beach and walked through town together. Brighton is very pretty and after two days, you know how to get from one place to another.

Though I was 18 at that time, I tried to take the bus early enough for arriving at home at 11 pm.

My host mother even allowed me to invite some friends to her house. That was very kind. Besides, I used to play Wii and Sing Star with my host sisters or I watched DVDs with the girls in my bedroom.

To sum up, the two weeks in Brighton were AWESOME! I got to know many nice people about my age, the English lessons at school were fun and I got many interesting impressions of famous places, I will never forget.

Two weeks in Brighton don’t make any student become genious in English, because most of the day you are together with persons, speaking German. But I’m sure that these two weeks changed many pupils’ attitude towards learning English.

Isn’t that an achievement, too? 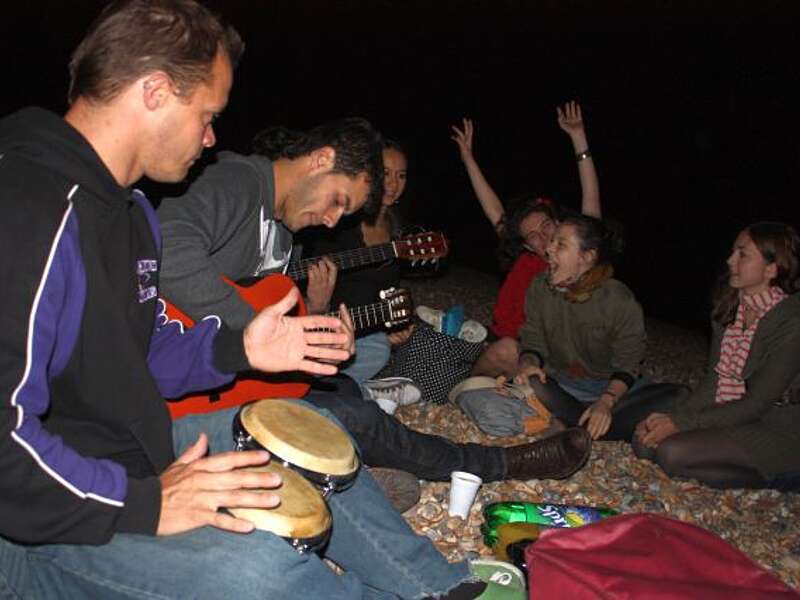